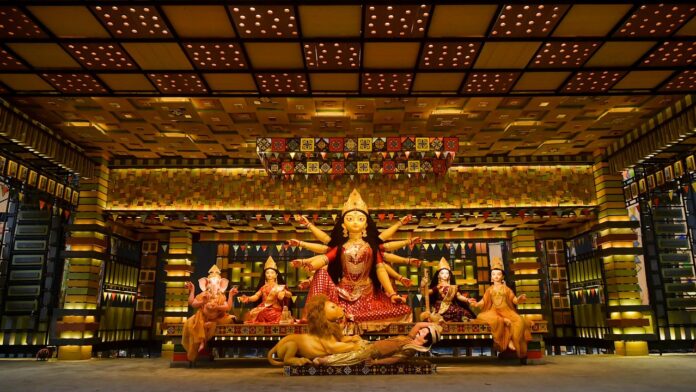 If you want to experience Durga Puja Festival in Kolkata, ideally you should be in the city at least a week before the start of the festival so that you can see the idols of the goddess being finalized. If that’s not possible, there are still plenty of other ways to enjoy it – all night long! Here are the best of them.

The easiest way to participate in the festivities is by visiting the Durga Puja festival, such as List and Online Booking of Tours organized by the West Bengal Tourism Development Corporation, Calcutta Photo Tours, Walk of Kolkata, Calcutta Walk, Jupiter Travels and Let’s Meet Up Tours.

More information about Durga Puja including tourism is also available on the Durga Puja website of West Bengal Tourism. Alternatively, board one of the special buses operated by the West Bengal Transport Corporation. There are various routes to choose from.

See Durga Idols Being Made

The beautifully handcrafted idols of Goddess Durga are surely stunning. However, you’ll appreciate them even more if you see the effort that went into making them. Fortunately, this isn’t difficult to do. Most of them are crafted in one area – Kumartuli in northern Kolkata, about a 30-minute drive from the city center. The name literally means “potter’s area” and as it suggests, the area was settled by a group of potters.

Nowadays around 150 potter families live there. If you visit there on the occasion of Mahalaya (about a week before the start of Durga Puja), you will be able to gaze at the idols in an auspicious ritual called Chokkhu Daan.

Durga Puja begins with the invocation of the sacred presence of Goddess Durga in the idols. The ritual begins before dawn, at dawn, with the bathing of a banana tree in the Hooghly River. The banana tree is dressed as a newlywed bride (known as “Kola Bou”, Banana Bride) in a sari, and is used to carry the energy of the goddess. The best places to participate in the ritual are Prinsep, Bagh Bazaar, and Ahiritola Ghat.

Undoubtedly the highlight of Durga Puja is visiting the many different displays (pandals) of Goddess Durga, each with a unique theme or decorative style. This activity is commonly called “pandal hopping”. There are thousands of pandals in Kolkata, so it is possible to visit only a fraction of them – and even then it requires a little strategic planning as they are spread across the city. You’ll find the most famous ones in North and South Kolkata, which are easily connected by the Metro Railway. The most popular time to hoist the pandals is at night when they are lit. If you go during the day, you can avoid overcrowding.

While Kolkata’s public Durga Puja gets all the attention, the traditional “Boni Bari” puja in the city’s palatial old private haveli is also really worth experiencing. Havelis belong to the rich aristocratic zamindar (zamindar) families who have been worshiping for centuries. They are spread across Kolkata (as well as other major cities of Bengal). Two of the most famous ones are Sovabazar Raj Bari and Rani Rashmoni Bari in North Kolkata.

Let’s Meet Up Tours runs all-day Bondi Bari Tours for the Inn and more. West Bengal Tourism also organizes bus tours. About an hour and a half to the south of Kolkata, the grand Shahi Bondi puja is being performed in the splendidly restored Raj Bari. Advance reservation is required to participate. Alternatively, the South Bengal State Transport Corporation operates bus travel south of Kolkata to Raj Bari Puja and others.

Kumari Puja is another important ritual that is performed during the Durga Puja festival. During the festival, Goddess Durga is worshiped in various forms. In this ritual, she has worshiped in the form of an innocent unmarried girl. It serves as a reminder that the Goddess and her energy are omnipresent in all beings. An elaborate program of rituals is organized for Durga Puja including a special Kumari Puja at Belur Math in Kolkata.

Dance for the Goddess

After the evening rituals on Ashtami, the devotional Dhunuchi folk dance is performed in front of Goddess Durga to appease her. This is done by holding an earthen pot filled with burning coconut husk and camphor. Drummers lead the dancers with their beats, which vary in tempo. Smoke, sound, and rhythmic waves surround the atmosphere. It’s intense and intoxicating! This dance is inclusive and any man and woman can participate. It has become so popular that people have started organizing competitions.

There can never be a better time than Durga Puja to taste the famous Bengali cuisine of Kolkata. The festival is not considered complete without food! You will find a wide range of it everywhere on the streets, in pandals, and in specialty Bengali restaurants. Walking the pandal is tiring, so eat food when you’re out and about. The food served to the visitors at the pandals is called blog (prasad that is distributed to the god).

It usually consists of mixed vegetable curry, a sweet dish, fried items, and chutney. Bengali restaurants in Kolkata have exclusive Durga Puja menus filled with authentic dishes – both buffet and a la carte. Bengali sweets are also consumed in huge quantities during the festival! On Navami, the goddess’s favorite bhog (food) is prepared and offered to her, and then distributed to the devotees.

On the last day of Durga Puja, known as Dashami, the celebration begins with married women placing red vermilion (powder) on the idols of Goddess Durga. Then they smear it on each other. In the evening the idols are immersed in water. One of the most popular immersion points is Babu Ghat (located near the Garden of Eden), though you’ll be able to catch the action at any of the piers along the river. A great way to see it is by boat.

The West Bengal Tourism Development Corporation organizes special immersion boat cruises down the river. Otherwise, head to the Red Road, which runs through the grounds, to watch Durga idols being carried in procession to the ghats, as the merry-goers say, “Ashe bochor abar ho!” (It will happen again next year!)

Read About Festivals in India