Breakfast around the World 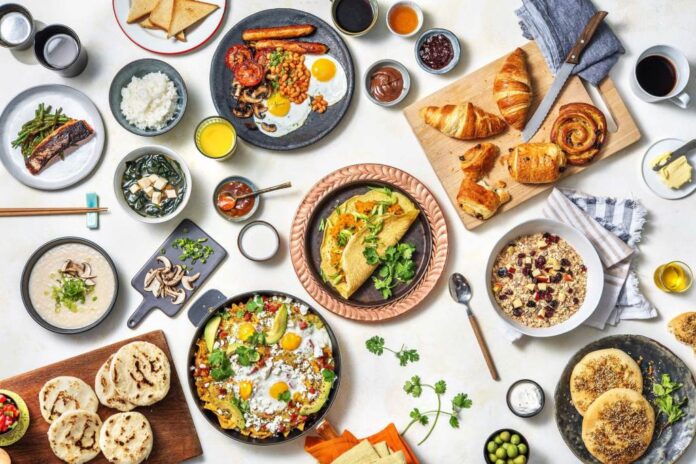 The first meal of the day on this continent varies from region to region. North African breakfast may be heavily influenced by Arab tradition and may include cucumbers, tomatoes, olives, hummus, jam and toast, and sometimes a hard-boiled egg.

Bread is a popular breakfast staple throughout West and East Africa. In countries with heavy French influence, beignets and pastries are offered alongside omelets, while more rural areas of Africa will find porridge or porridge made from millet, rice, or corn on the menu, in addition to fresh fruit. In Kenya and Tanzania, common breakfast dishes include mandazi (a deep-fried mixture of wheat flour, sugar, and eggs), beef samosa, chapati (a thin pancake made from wheat flour), hard-boiled eggs, and tea.

Ugandans enjoy roasted bananas with grilled beef for breakfast. Thin pancakes or homemade bread with jam and tea or coffee are common in Rwanda, Ethiopia, and Somalia. South Africa – due to colonial influences – enjoys French and English-style breakfasts with eggs, croissants, and bacon.

Asian breakfast foods vary greatly across regions, but often feature rice, noodles, or soup dishes and are based on what foods may be grown in that region. Vietnam is known for its breakfast dishes like pho soup, French bread with butter or jam, and even sticky rice. Mango and dragon fruit are also often served. Chinese breakfast is also heavily influenced by local agriculture. In northern China, wheat is common, so a bowl of hot wheat noodles with beef wrap rolls, tofu, rice rolls, and bean fritters is a regular breakfast item. In southern China, rice is a primary food and a staple at all meals, including breakfast. But it is a dish called congee (rice porridge with the consistency of a thick soup) that people living in the region in China love to dig into.

In Japan, the word for breakfast is asagohan, which means “morning rice” or “first rice.” The Japanese breakfast is light and simple, consisting of rice covered in natto (a sauce of fermented soybeans). Cooked fish, pickled vegetables, and tea may also be served. A traditional Korean breakfast includes rice, kimchi (spicy fermented cabbage), beef or fish, and usually bread.

In Europe, breakfast as a specialty meal was not common until the 17th century. In fact, the Romans did not eat until midday. “The Romans believed that it was healthful to eat only one meal a day,” food historian Carolyn Yeldham told the BBC in a November 15, 2012 article in Breakfast, Lunch and Dinner: Have We Always Been have eaten them? “They were obsessed with digestion and eating more than one meal was considered a form of gluttony.

This thinking influenced the way people eat for a long time.” Breakfast made its way to the table in the 17th century, but it wasn’t until the 19th century—and the Industrial Revolution—that it worked to make breakfast a regular meal. hours were set.

European breakfasts vary by country but often include bread or pastries, jam, oatmeal, or muesli (a cereal mixture of nuts, oats, raisins, and other dried fruits), yogurt, meat slices or sausage, egg, and cheese. Huh. Coffee or tea is usually served with the meal. In France, a slice of baguette topped with butter and jam is common, while the Spaniards usually start their morning sweet with a serving of churros con chocolate (hot chocolate with churros).

The sugar solution is deep-fried in a stick form before serving with a cup of thick hot chocolate, which is used as a dip. Smorgas, or open-faced sandwiches, are a typical breakfast item in Sweden. Two slices of bread are often served with a thin spread of butter and a combination of toppings including ham, cheese, lettuce, cucumber, tomato, and hard-boiled eggs. The classic German breakfast includes bread rolls, butter, jam, ham, sausage, soft-boiled eggs, and coffee. Greece welcomes all kinds of pastries for its morning dinner.

While most Australian and New Zealand breakfasts are similar to those in Europe, they have dishes specific to their region. Toast with Vegemite is a common breakfast in Australia and New Zealand. Vegemite is a spread made from brewer’s yeast, vegetables, wheat, and spices. During the colder months, New Zealanders often eat oatmeal or Veet-Bix for breakfast with hot milk.

In some parts of India, the morning meal is often the same as lunch or dinner and may consist of flatbread, idli (rice flour pancakes), or dosa (thin lentil crepes), served with various dips and chutneys. And with spicy potatoes. Another common dish is appam, which are bowl-shaped pancakes filled with eggs, honey, and either a spicy sauce or coconut cream.

Traditionally, breakfast was a large meal, including rich, sweet desserts and bean soup, especially for the working class. In modern times, it has become a light, small meal without sweets. There are two daily meal patterns in the Middle East, one for most of the year and one during Ramadan. During non-Ramadan times, people in the Middle East eat at least three main meals throughout the day. During Ramadan, the meal turns into a small meal before sunrise and a large feast at sunset.

The cuisine found here reflects both the Arab tradition and the common local foods that flourish throughout the year. Locals often eat a Meza (spread of small plates) of labneh cheese, hummus, dates, cucumbers, tomatoes, olives and olive oil, freshly baked pita bread, feta, and tahini. Typically, tea is served instead of coffee (coffee is often saved for afternoons and afternoons).

The United States and Canada are two of the many countries where breakfast consists of foods that are not typically eaten at other meals. Here, breakfast dishes vary widely but can include oatmeal, cereal, egg dishes, bacon, toast, pancakes, waffles, bagels, pastries, fruit, juice, coffee, and tea. Many breakfast items are influenced by European foods.

South American breakfast cuisine tends to be on the savory side. In Venezuela, breakfast often consists of arepa, a corn flatbread stuffed with various fillings such as cheese, meat, or beans. Brazilians eat homemade pao de quijos (round-shaped cheese buns), which are served with fruit, coffee, yogurt, and sometimes white cheese. Argentine breakfast consists of coffee and usually a croissant or a brioche.

Grilled sandwiches with cheese and ham, known as tostadas, are also served, as well as yerba maté, a tea-like beverage made from the dried leaves and twigs of the yerba plant. Chileans eat breakfast consisting of Marquetta or halula bread covered with jam, butter, or cheese.

Colombians eat a variety of breakfast dishes, including tamal tolmens (rice, dried beans, beef, chicken, and pork, egg and potato, covered with corn flour and cooked in a banana leaf) to hot chocolate. It is eaten with, and changua (milk soup, scallion, and cheese). In Ecuador, fried bananas, hard white cheese, scrambled eggs, and motte (a type of corn) are often served with strong black coffee.