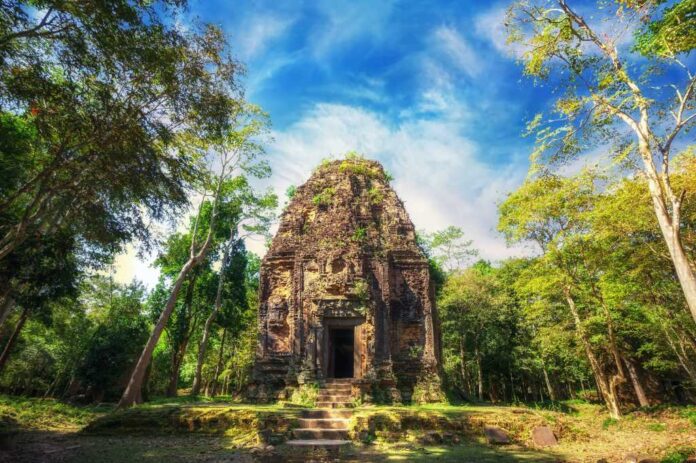 Sambor Prei Kuk & Ishanapura: The archaeological site of Sambor Pre Kuk in the Khmer language, “Temple in the Prosperity of the Forest” has been identified as Ishanpura, the capital of the Chenla Kingdom that flourished in the late 6th and early 7th centuries. The estate includes over a hundred temples, ten of which are octagonal, unique specimens of his style in Southeast Asia. The sandstone elements decorated in the site are characteristic of the pre-Angkor decorative idiom, known as the Sambor Pre Kuk style. Some of these elements, including the lintels, pediment, and colonnade, are true masterpieces. The art and architecture developed here became the model for other parts of the region and formed the basis for the unique Khmer style of the Angkor period.

Sambor Pre Kuk (Khmer: – Prasat Sambor Pre Kuk) is an archaeological site in Cambodia, located in Kampong Thom Province, 30 km (19 mi) north of the provincial capital, Kampong Thom, 176 km from Angkor ( 109 miles) to the east. and 206 km (128 mi) north of Phnom Penh. The now-ruined complex dates back to the pre-Angkorian Chenla Kingdom (late 6th to 9th centuries), which was established as the central royal sanctuary and capital by King Isanavarman I, which was then called Isanapura (Khmer: ). – Isan Borak). In 2017, Sambor Pre Cook has declared a UNESCO World Heritage Site.

Isanavarman I ruled the Chenla kingdom between 616 and 637 AD, taking Isanabura as his capital and it is argued that he built the main temple, Prasada Sambor (Group N), because of his reign. There is an inscription at the site attributed to and dated 13 September 627 AD The king is also known to have sent his first embassy to China at the court of the Sui dynasty (616–617). After the end of Chinese rule, the Chenla conquered various principalities in Cambodia’s northwest of Yanghu (ī) (i.e. after 31 January 656), which had previously (in 638/39) paid tribute to China. An inscription from the reign of Isnarvarman I claimed that he was “the king of kings, who ruled over Suvarnabhumi”. Dr. Wong Sothera of the Royal University of Phnom Penh claimed that the inscription “will prove that Suvarnabhumi was a Khmer Empire.”

The last significant king in Isanpura was Jayavarman I, whose death in the early 8th century turmoiled the kingdom, breaking it into several princely states and opening the way to a new time: Angkor. The site is also claimed as the early capital of Jayavarman II (O’Reilly & Jacques, 1990).

Following Lon Nol’s coup to Prince Norodom Sihanouk in 1970, US President Richard Nixon ordered a covert bombing of Cambodia to fight Khmer Rouge guerrillas and any North Vietnamese influence in the country. US aircraft bombed sites inside the archaeological site, leaving pits near temples, while guerrillas left several mines on the ground that were only cleared in 2008.

More To Read About Cambodia