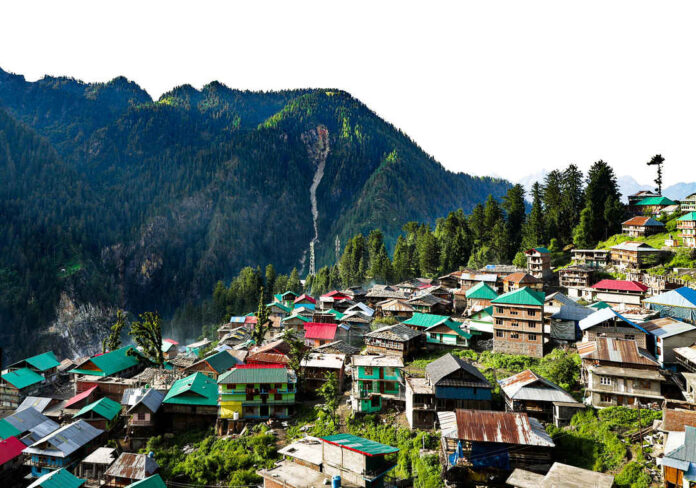 Warm monsoonal rain swept over Manali, the popular resort town at the foot of the Indian Himalaya in Himachal Pradesh. While sheltering in a cafe on the main street of Vashist, across the River Beas from Manali proper, I read about the nearby village of Malana. Despite being just 13 miles directly from Manali, Malana couldn’t be much more different from its traffic-clogged neighbor. High in the hills of an isolated valley, a road near the village was only constructed in the last few years, with the development of the hydropower project on the Malana River.

The people of Malana believe they are descended from the armies of Alexander the Great, from his men who broke away while passing through this area and settled, marrying locals. The people there also practice a stringent form of untouchability and believe that all outsiders are unclean untouchables, whether fellow Hindu Indians or foreigners. Although India constitutionally abolished the caste system in 1950, in reality, it’s practiced throughout the country. Visitors are welcome to visit Malana, but they cannot touch anything except the ground they walk upon. Throughout the village, signs state the fine for touching the village’s temple or walls is 2,500 rupees. There are guesthouses on the edges of Malana that are open to visitors, but they are run by non-natives to Malana. They are not permitted within the village’s actual perimeters.

My guidebook listed Malana as a day-trip destination from Manali, but I was so fascinated by the sound of the village that I decided to take my time and trek there, instead.

The Trek from Naggar to Malana

The four-day, three-night trek to Malana starts from the village of Naggar, 14 miles along the highway south of Manali. From Naggar, the route climbs up to the 12,000-foot Chanderkani Pass. This would be a cold trek frosted with snow in many seasons, but I was trekking during the monsoon in July. Certainly not peak trekking season in Himachal Pradesh, but offering its own rewards, as I was to discover.

Agencies all over Manali and Vashisht can arrange guides and porters to take trekkers to Malana, but I opted for a small, family-run, Naggar-based agency. Having traveled extensively around India over many years, I wasn’t nervous doing most things solo, but I didn’t want to trek through the mountains without a guide. As this was a camping trek, I would also need to take a tent, sleeping gear, and all food. I was accompanied by a guide, Ranjit, and two porters-come-cooks, Ramesh and Umesh. In some other parts of India (such as Ladakh), women guides are available for women travelers to hire. I didn’t have this option for this trek in Himachal Pradesh, but I made sure that the agency I booked with had good reviews and references, and I ended up feeling completely comfortable in the presence of the three men over four days.

Heavy rain overnight and into the morning of day one meant we made a slow start, but one advantage of starting the trek from Naggar rather than Manali is that the trailhead is just a short drive away.

The walk was entirely uphill for the first two days, but it wasn’t too steep and passed through woods, meadows, and small villages. The first village we reached was Rumsu, just 30 minutes from Naggar. With its traditional stone homes and wooden temple carved in the Himachali style, it’s an ideal day trip destination for travelers who don’t have time for a longer trek from Naggar.

The rain started again at Rumsu and continued for the rest of the day. But, Naggar itself is at almost 6,000 feet, and as we climbed in altitude, the rain was pleasantly cooling rather than stiflingly humid. After about 3.5 hours’ walk, we reached a meadow that was the first campsite. There would have been impressive views over the Kullu Valley if it hadn’t been raining, but the monsoon provided me with an excuse to retreat to my tent and read for the evening. We were the only group camped there, though Ranjit told me that it’s bustling in June when students are on holiday.

It rained heavily overnight, and although I managed to stay dry, the water seeped through the groundsheet of my tent and soaked most of my belongings. Fortunately, one set of clothes was sitting on top of everything else, and they stayed dry, so I didn’t have to wear wet clothes.

The second day of walking was much like the first: through woods and meadows, with intermittent rain, uphill. I started to question the wisdom of trekking during the height of the monsoon but was thankful that at least there weren’t any leeches.

Day three started better, with just a little rain. It was the day I’d been told to look forward to when we’d reach Malana. But not before crossing the high Chanderkani Pass, which connects the Kullu Valley with the Malana Valley, which itself connects to the Parvati Valley beyond. The day would end with a very steep descent to our campsite above Malana.

The ascent to the pass was surprisingly easy. We had camped about a 90-minute walk beneath the pass, but it was mostly a gentle uphill walk through meadows. At 12,000 feet, the Chanderkani Pass is high enough that travelers may feel dizzy, short of breath, or develop an altitude-induced headache. I didn’t notice the altitude, but that may have been because I’d just spent a few weeks in high-altitude Ladakh. Travelers coming from lower altitudes should be aware that they may feel unwell at the Chanderkani Pass, but this is likely to be short-lived as the trail soon descends sharply. The easiest remedy for altitude sickness is to go down.

The rainclouds obscured the views, again, but at least there wasn’t any snow to trudge through. Snow can be present all the way until June, so it’s wise to be prepared for this trek at any time of year.

The meadows leading down from the pass were thick with bright, colorful wildflowers and humming with the sound of bees. Although not as famous as the Valley of the Flowers trek in Uttarakhand, the carpets of flowers here are equally impressive. Purple snapdragons, tiny blue forget-me-nots, yellow daisies, bright red poppy-like flowers (that weren’t poppies), and a whole variety of pink, purple, blue, yellow, red flowers that I couldn’t name made up for every moment of damp discomfort I’d felt up until that point on the trek.

The Descent to Malana

We stopped to eat our picnic lunch at the top of the downhill path to Malana. Having done a few Himalayan treks, I knew that the descent was often more challenging than the ascent, but I didn’t realize quite how difficult this was going to be. The Naggar to Malana trek was rated as “strenuous,” and after the first two days, I thought that was inaccurate. But, by the end of the third day, I understood why. The “path” from the Chanderkani Pass down to Malana was through thick, high foliage and over steep rocks. The road through the Malana Valley was a dizzyingly steep, long way down. As it was the monsoon season, the path was wet, but fortunately, it didn’t rain much on this day. After about an hour, my legs started shaking uncontrollably, and I had to lean on Ranjit most of the way down. The whole descent took about four hours.

As my guides set up camp on a small ridge above Malana, I enjoyed clear sunset views down the Malana Valley and towards the Parvati Valley. The first clear evening of the trek.

The next morning we walked into Malana itself, just ten minutes downhill from the campsite. Malana was one of the most isolated settlements in Himachal Pradesh until the road was built through the Malana Valley several years ago, at the same time as the hydropower project. Malana village is the only settlement in the Malana Valley. As the inhabitants are very secretive (and speak their own language, Kanashi), it’s not known how many people actually live there permanently. No more than a few hundred, anyway.

Ranjit showed me to the temple, though we weren’t allowed inside. We walked past the small school and the library, both closed. A serious fire in 2008 had destroyed a lot of Malana’s oldest cultural attractions. Malana has a very different vibe to other towns in Himachal Pradesh, which tend to be very neat, tidy, and peaceful. Although I didn’t feel unwelcome, and there were a few other tourists around, perhaps it was knowing that I would be fined for so much as touching a wall that made me feel a bit uncomfortable.

This is where we were meant to meet our pick-up to drive us the two-three hours back to Naggar. But we got a call saying that the Jeep had a flat tire and was being fixed at the mechanic’s in the town of Jhari and couldn’t make it all the way to pick us up! So, we had to walk down more steps to Jhari. I was really hobbling by the end but looked forward to returning to Vashisht and soaking in the natural, open-air hot springs in the center of the village—which is exactly what I did the following day.

Previous article
HUNTER VALLEY – WINE COUNTRY, AUSTRALIA
Next article
Ujjain – The Top 10 Things to Do in 2022