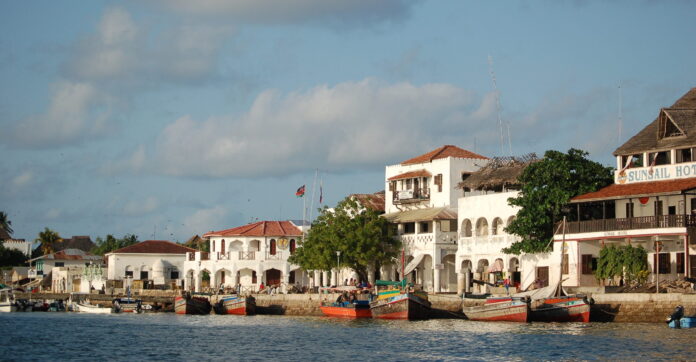 Located off the coast of northern Kenya, Lamu Island is one of the main islands of the Lamu Archipelago. With a trade history that dates back to the 14th century and an abundance of fantastically preserved Swahili and Islamic architecture, it is a major destination for anyone with an interest in East Africa’s colorful heritage. There are no paved roads on Lamu Island, and pedestrians and donkey carts still ply its sandy alleyways as they have been for hundreds of years. Consequently, a visit there can feel like stepping back in time. Visitors come to disconnect from technology and to revel in the beauty of the island’s white-sand beaches and the azure Indian Ocean views.

Lamu Island has been continuously inhabited for over 700 years since Arab traders established a port there in the 14th century. In the centuries that followed, it became a major seaport for trade between the native Africans of the Swahili Coast and visiting Arabs, Persians, Indians, and Europeans. Lamu Old Town grew prosperous during the slave trade years, and for a brief period, was governed by the Sultan of Zanzibar, the one-time Omani ruler of Tanzania’s Zanzibar Archipelago.

After Kenyan independence in 1963, Lamu’s reputation as a tourist destination grew gradually before being cemented in 2001 with the inscription of Lamu Old Town as a UNESCO World Heritage Site. Today, the town is recognized as the oldest and best-preserved Swahili settlement in all of East Africa.

Top Things to Do

Every Lamu adventure should start in Lamu Old Town, where original Swahili homes and landmarks vie for space on narrow, labyrinthine streets. Made from coral stone and mangrove timber, many of the buildings stand out for architectural flourishes that include elaborately carved doorways leading to cool inner courtyards, breezy verandas, and sea-facing arcades. Lamu Museum is the main point of interest for those wanting an insight into Swahili culture. Displays range from artifacts collected at local ruin sites to traditional boat-building tools and ceremonial wedding attire. Tickets include entry to 19th-century Lamu Fort, which now acts as a library for valuable collections of Swahili poetry and historical reference books.

The rural villages of Shela and Matondoni offer two very different experiences, both from Lamu Old Town and from each other. Shela is known for its collection of 19th-century mosques but has also become an upmarket destination with several luxury eco-lodges and yoga retreats. The best dining and boutique shopping opportunities are found here, while the bohemian atmosphere attracts plenty of artists and designers. Meanwhile, the fishing village of Matondoni remains mostly untouched, with few visitors. However, it’s worth taking a walking tour or dhow trip there to see master boat-builders repairing and constructing new dhows using traditional methods.

There are many beautiful beaches on Lamu Island, of which the most famous is probably Shela Beach. Here you’ll find over seven miles of idyllic white sand, though swimmers should be wary of rip currents. Dhow and speedboat cruises also take beach lovers to Kiwayu Island. As part of the Kiunga Marine National Park, it’s home to unspoiled beaches and some beautiful coral reefs. While snorkeling, keep an eye out for exciting marine life, including turtles, dolphins, and rare dugongs. Deep-sea fishing is a favorite pastime for keen anglers, who have the chance to hook sailfish, marlin, kingfish, and more depending on the season. Seasonal trade winds provide excellent opportunities for kitesurfing and windsurfing.

Lamu Island is an essential center for education in Islamic and Swahili culture and hosts many different festivals throughout the year. The most prominent of these is the Lamu Cultural Festival and the Maulidi Festival. The former celebrates Swahili traditions with donkey and dhow races, swimming competitions, poetry readings, and performances of age-old crafts and dancing, and the latter is a week-long celebration of the birth of the Prophet Muhammad. It attracts pilgrims from all over East Africa and the Indian Ocean and includes music, dancing, and street parades. Other popular festivals are the Lamu Food Festival (which celebrates the island’s diverse culinary heritage) and the Lamu Yoga Festival.

There are many accommodation options on Lamu Island to suit most tastes and budgets. In Lamu Old Town, two of the most authentic choices are Lamu House Hotel and Baytril Ajaib. The first is a converted Swahili townhouse on the historic seafront, with 10 beautifully decorated guest rooms, three swimming pools, and a restaurant that specializes in delicious local cuisine. The second dates back to the 18th century and has four lovingly restored rooms and suites. Its elevated position affords magnificent sunset views of the town and sea, which can be appreciated while sipping evening drinks on the veranda.

Shela’s top-rated hotel is the Peponi Hotel, a waterfront property with a tranquil pool and gardens, and 28 boutique rooms. Upgrade to a Superior Room for a private outside area complete with a swing bed overlooking the ocean. The hotel’s gourmet restaurant makes the most of the island’s abundant fresh seafood, serving inventive sushi alongside Swahili favorites. On the remote southwestern tip of the island, the Kizingo eco-lodge is the ultimate pick for those looking to escape from it all. There are eight beachfront bandas to choose from, all delivering the last word in barefoot luxury. Activities range from sunset dune walks to swimming with wild dolphins.

Getting There and Around

The easiest way to get to Lamu Island is to fly into Manda Airport (LAU), located on neighboring Manda Island. Domestic airlines like Airkenya Express, Safarilink, Fly 540, and Mombasa Safari Air offer daily flights from major cities, including Nairobi, Mombasa, and Malindi. Ferries depart for Lamu Old Town from Manda Island and Mokowe on the mainland. If you’re heading to Shela or anywhere else on the island, you’ll need to take another dhow to reach your final destination. It’s also possible to travel from Mombasa to Mokowe by bus. The best company is Tawakal, which offers air-conditioned buses and two daily departures. The journey takes approximately eight hours.

Once you get to the island, it’s easy to get around on foot. For longer journeys in between towns, hire a donkey or travel around the coast by dhow. Remember that the pathways are not lit, so if you plan on coming home after dark, you’ll need to take a flashlight with you.

Like the rest of the Kenyan coast, Lamu Island has a tropical climate with high temperatures and plenty of humidity all year round. The hottest and most humid time of year is the January to March dry season. The July to October dry season is slightly cooler and is a more pleasant time of year to travel for those that don’t do well in intense heat. The long rains last from April to early June and are best avoided. The short rains (from November to December) can be an excellent time to travel because precipitation usually takes the form of short, sharp thunderstorms with bright sunshine in between. Rates for tours and accommodation are cheaper at this time of year, and there are fewer tourists.