Holi In India – The Festival of Colours 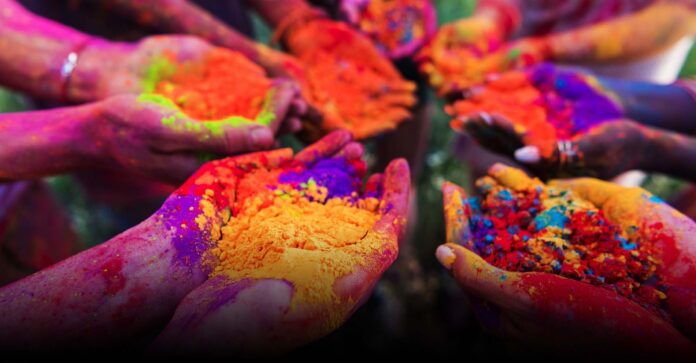 It’s a unique festival, the likes of which are probably not found anywhere else in the world. A boisterous yet colourful celebration of the many myths, legends and deities associated with it. Holi is marked as much by religious fever and devotion as it is by loud music, traditional dances and of course the forceful scrubbing of bright gulal and abeer on friends and relatives. Interestingly, in India, different cities and states have their unique traditions and ways of observing this day. We bring you the top five destinations where Holi is not just a riot of colours, but a meaningful amalgamation of traditions and devotion. These are must-visit places during Holi if you want a real feel of this vibrant festival.

Krishna Leela at Mathura and Vrindavan

Holi has a special significance in the cities of Mathura, the birthplace of Lord Krishna and Vrindavan, the place where he was raised. Here, unlike the rest of the country, Holi is associated with this supreme deity and his many legends. People in these cities believe that the festival was initiated by Lord Krishna and consequently, the various temples dedicated to this deity celebrate the festival, each on a different day. The well-known Krishna Leela or Raas Leela, the dramatization of  Krishna courting the beautiful Radha, his paramour, are played out and people throw buckets full of flowers and dry colours on one another amidst loud chants of Radhe Radhe.

Barsane is a small town about 50 kilometres north of Mathura and is also associated with Lord Krishna. Here, the festival is celebrated in a very unique fashion. Referred to as the lath maar Holi, for the use of a lath or bamboo stick by the women, the act of colouring one another takes on a very coquettish form here with men rushing towards women to drench them in the coloured water and women staving their efforts with the use of these handy laths. The festivities here are as much fun to watch as they are to partake in.

A cultural celebration in Shantiniketan

Associated with Nobel Laureate Rabindra Nath Tagore, the university town of Shantiniketan about 180kilometres from Kolkata gives a flavourful, aesthetic touch to Holi celebrations here. The students of Viswa-Bharti University in particular draw large crowds of tourists both local and foreign, who come to witness the cultural extravaganza during this time. Known as the Vasant Utsav, it involves students putting up cultural performances, song and dance shows and plays, all based on the works of this great writer. The cultural performances are followed by the playing of colours.

Elephant Festival and Holi in Jaipur

Holi in Rajasthan’s capital is a majestic affair with the popular Elephant Festival, which takes place a day before Holi. On this day, caparisoned elephants are led in a magnificent procession through the streets of Jaipur and are later involved in various entertaining activities including elephant polo, elephant races and a tug of war. The festivities end with the playing of colours and a fireworks display. The festival is a huge draw for tourists to the city.

Banswara, a small town near Udaipur in Rajasthan, is a tribal stronghold and an erstwhile princely state. The Holi celebrations here are a unique display of the culture and traditions of the Bhil tribe. On this day the Bhils, dressed in all their festive finery, perform the beautiful Ghair traditional dance around a huge bonfire. Visitors can visit Banswara from Udaipur or Ratlam in Madhya Pradesh.

Q. Where is the best place to participate in Holi in India?

A. Some of the best places where you can witness some craziest celebrations include Jaipur, Vrindavan, Delhi, Udaipur, Uttarakhand, Awadh, and Purulia.

Q. Is Holi celebrated in Goa?

A. Goa has a significant Hindu population, which means it is celebrated there. There are many parties that are organized in Goa during Holi week.

Q. How is Holi celebrated in Goa?

A. Since Goa has many Hindus, this festival is celebrated with great enthusiasm for almost a month and is a part of the spring festival Sigmo. The celebration includes Holika Puja, in which people offer gulal to their deities.

Q. How is the festival of Holi celebrated?

A. One of the most popular and biggest festivals of India. It is a 2-day long festival, the first day is called ‘Choti Holi’ and the second day is ‘Rangwali Holi’. On the first day, a Holika bonfire is arranged in the evening where people pray to God to cleanse their internal evil. On the second day, starting from the morning, people start playing Holi with herbal colours and water. The scene of chasing one another to throw colours or coloured water is common on the day.

Q. How we can make Holi festival eco friendly?

A. Use organic colours or use flowers and leaves to make your own colours, and do not wastewater.

Things to do In Switzerland