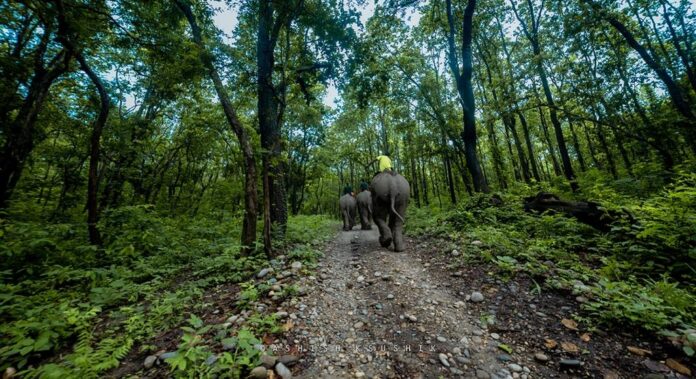 Bihar’s rich natural scenery and wildlife make it an important destination for eco-tourism. Be it catching a glimpse of the magnificent big cats or witnessing the natural wonders of Bihar, Eco Circuit has it all. Enjoy visits to some of the most pristine and undisturbed natural areas in a responsible way. Visiting this circuit also serves the purpose of educating tourists about these ecologically fragile areas, local people, and conservation efforts.

Ghoda Katora Lake is a beautiful place near Rajgir. It is said that the horses of the kings of Rajgir used to drink water here. The shape of the lake is like a horse and the lake is surrounded by mountains on three sides. It is located near World Peace Pagoda. The lake surrounded by hills looks picturesque and makes for a perfect visit. Horse carts or tongas and cycles help tourists reach them. Boating can be enjoyed here. It is a very relaxing place and everyone can hear the sound of wind and water.

The Valmiki Tiger Reserve forms the easternmost extent of the Himalayan Terai forests in India and is the only tiger reserve in Bihar. Situated in the bio-geographical zone of the Gangetic plains of the country, the forest consists of a combination of Bhabar and Terai regions. Valmiki Tiger Reserve is located in the north-western (mostly West Champaran) district of Bihar. The name of the district is derived from two words Champa and Aranya which mean forest of Champa trees.

Barabar Hills is the most sought-after tourist destination of Jehanabad district. It is home to the oldest surviving caves in the world. Being a rare historical site, today it has become an international tourist destination and attracts a large number of foreign tourists every year. It is situated near the Makhdumpur village of Jehanabad district.

These caves certainly served as religious centers for innumerable Jain monks for thousands of years, but there are historical records to prove that Gautama Buddha also meditated in these caves. It has a special echo effect feature; That
is, any sound made here lasts for 3 minutes.

There are many hot springs that maintain almost the same temperature throughout the year.

It is a scenic spot with a natural spring surrounded by hills on three sides, inside the deep Kharagpur forest, 50 km from the district headquarter. According to Mahabharata; Bhima, one of the Pandavas, built a dam (bandh) here and hence it is called Bhimabandha. and is known to be the source of hot water.

Bhimbandh Wildlife Sanctuary is located in the southwest of Munger district. The forests cover an area of 681.99 km² on the hills and undulating tracts of the Kharagpur Hills. It is situated 56 km from the southern border of Munger, 20 km from Jamui Railway Station, and 200 km from Patna Airport.

Bhimbandh is situated to the south of the Ganges River, on the northern edge of the Chota Nagpur Plateau, and to the west of the Santhal Parganas. It is surrounded on all sides by densely populated non-forestry areas. There are many hot springs in the valley parts and in the foothills, the best of which are Bhimabandh, Sita Kund, and Rishi Kund. All hot springs maintain approximately the same temperature throughout the year. Among them, Bhimabandh Springs has the warmest temperature (52 °C to 65 °C) and discharge (0.84–1.12 cubic/sec) and is the best area for the exploration of geothermal energy potential.

There are many tourist places near the sanctuary, including Rishi Kund, Sita Kund, Ha-Ha Panch Kumari, Rameshwar Kund, and Kharagpur Lake.

Telhar Falls is a popular waterfall found in the Kaimur district of Bihar. This waterfall is on Rohtas plateau which is close to the Durgavati river at Bhabua.

The waterfall is about 32 km from the Bhabua area and about 47 km from the Mohania area. There are many attractions near the fall including Maa Mundeshwari Temple which is situated at a distance of 28 km from it. It is one of the oldest and most prominent temples in the region.

This waterfall also has a dam called Karamchat Dam which is located near it. It is surrounded by amazing views from all sides and is perfect for a picnic with your family or friends. This deep cascade of waterfalls is worth seeing and experiencing and while there are quite a few waterfalls in Bihar, it is a very popular one and many people visit it mainly because of the view.

The waterfall ends at Telhar Kund Lake which is situated at the bottom of the waterfall and is a popular place for tourists to come and take a dip.