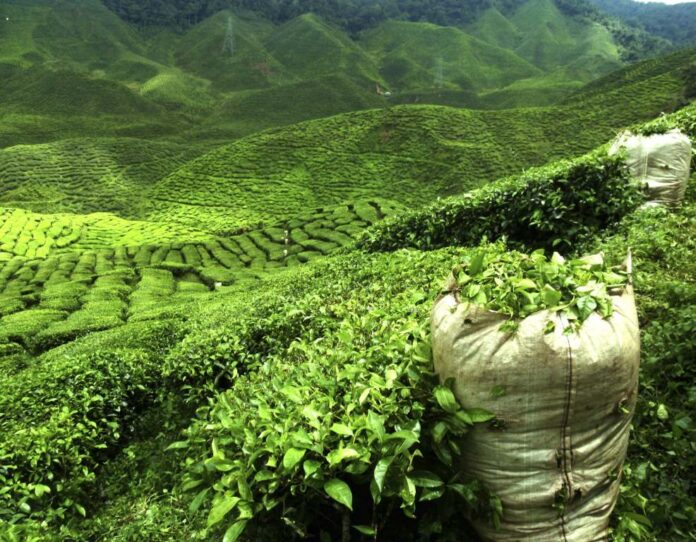 Tea Plantations – Indians love a good cup of tea (chai) and India is one of the largest tea growers in the world. However, over 70 percent of it is consumed by Indians themselves. The production of tea really took off during the days of British rule in India, when large tracts of land were converted for mass tea production.

Indians love a good cup of tea (chai) and India is one of the largest tea growers in the world. However, over 70 percent of it is consumed by Indians themselves. The production of tea really took off during the days of British rule in India, when large tracts of land were converted for mass tea production. If you’re a tea lover, don’t miss visiting these places where you’ll find the best Indian tea plantations and tea. You can even stay on a tea estate and tour the tea factories.

Darjeeling, as well as being one of India’s most popular hill stations, is surrounded by tea plantations that produce prized light-colored, floral-smelling tea. Around 25 percent of India’s total tea output comes from Darjeeling.

When to Go: March to November for tea plucking, but the monsoon season from June to September is best avoided.

Assam, located in India’s remote northeast, is the largest tea-producing region in the country. Mostly grown in the Brahmaputra Valley, malty Assamese tea is brightly colored. Jorhat, in the central part of the valley, is often referred to as the “Tea Capital of the World”.

When to Go: Mid-May to June end, for the best tea. Tea production continues until early December, but the quality of the tea steadily decreases. A Tea Festival is held in Jorhat every November.

As you enter Munnar, a popular hill station in Kerala, you’ll be greeted by miles upon miles of lush tea plantations. Once owned by Tata, the largest tea manufacturing company in India, they’ve now been sold to employees.

When to Go: The tourist season is from August to May, although winters are very cold during December and January.

Just across the border from Kerala, at 8,000 feet above sea level, Kolukkumalai Tea Estate is perhaps the highest tea plantation in the world. The tea grown there is known to have a unique aroma and taste because of the high altitude. Although it’s located only about 20 miles (32 kilometers) from Munnar town, it takes around 2 hours to reach this isolated destination via Suryanelli in Kerala’s Idukki district due to the rugged terrain. The final part of the journey can only be undertaken by jeep. It’s a Teapicturesque drive though. The tea estate was founded by the British in the early 1900s, and its factory still uses the original orthodox method of tea processing. It’s possible to visit it on a day trip. However, for the best experience, stay at least one night on the property in the guesthouse or mountain hut.

The mountainous Nilgiri district of Tamil Nadu, in south India, is known for its distinctive dark and intensely aromatic tea. Tea has been grown there for more than 100 years and is the most important industry in the region.

Take a Tour: Breakaway offers this Blue Mountains and High Tea trip from Coimbatore to Coonoor and back. Your host, a tea planter, will share his knowledge with you. You’ll also get to visit a farm stay that makes cheese.

When to Go: Tea is produced throughout the year in Nilgiri. However, the best teas are produced during the cooler winter months (late November to mid-February).

Wayanad, a lush mountainous agricultural area of Kerala, also produces a significant amount of tea (in addition to coffee and spices). Most of the tea plantations are located south of Kalpetta, in Vythiti and Meppadi. The road to Chembra Peak will take you through a private estate, which is worth a look.

When to Go: September through to April, to avoid the monsoon rain.

Tea was introduced to Palampur, about an hour from Dharamsala in the Kangra Valley of Himachal Pradesh, in the mid-19th century by the Superintendent of Botanical Gardens in Peshawar, Doctor Jameson.

When to Go: March to June and mid-September to November, for the best weather. Tea is plucked between April and October.

Q. Which is the largest tea garden in India?

A – Monabari Tea Estate in Vishwanath district of Assam is the largest tea estate in Asia.

Q. Where is the tea garden in India?

Q. Which city in India is famous for tea?

A – Jorhat is known as the tea capital of the world and this small town has been the main center of tea cultivation in the state. A trip to Assam is certainly incomplete without visiting a tea garden and nearby factory.

Q. Which state is known as the tea garden of India?

A – The state of Assam is known as the tea garden of India. The collective yield of tea gardens is more than 1.5 million pounds of tea each year. Assamese tea is grown mainly in the Brahmaputra valley and is brightly colored. Located in the central part of the valley, Jorhat is often referred to as the “Tea Capital of the World”.

Q. Which state is the largest producer of tea?

A – Assam is the largest tea-producing state in India.

Q. Which is the tea capital of India?

A – Located in the southern part of the Eastern Himalayas in Assam. It is bordered by the states of Arunachal Pradesh, Nagaland, Manipur, Mizoram, Meghalaya, Tripura, and West Bengal. The state shares its borders with two countries, Bhutan and Bangladesh.

Q. Which city is famous for tea plantations?

A – Darjeeling, West Bengal. Darjeeling, as well as being one of the most popular hill stations in India, is surrounded by tea gardens that produce the prized light-colored, floral-smelling tea. Darjeeling accounts for about 25 percent of India’s total tea production.

A – In 1788, The Royal Society of Arts began considering the idea of ​​planting saplings from China. Then, in 1824, tea plants were discovered in Assam by Robert Bruce and Maniram Dewan. The tea gardens later spread throughout Assam and Darjeeling.