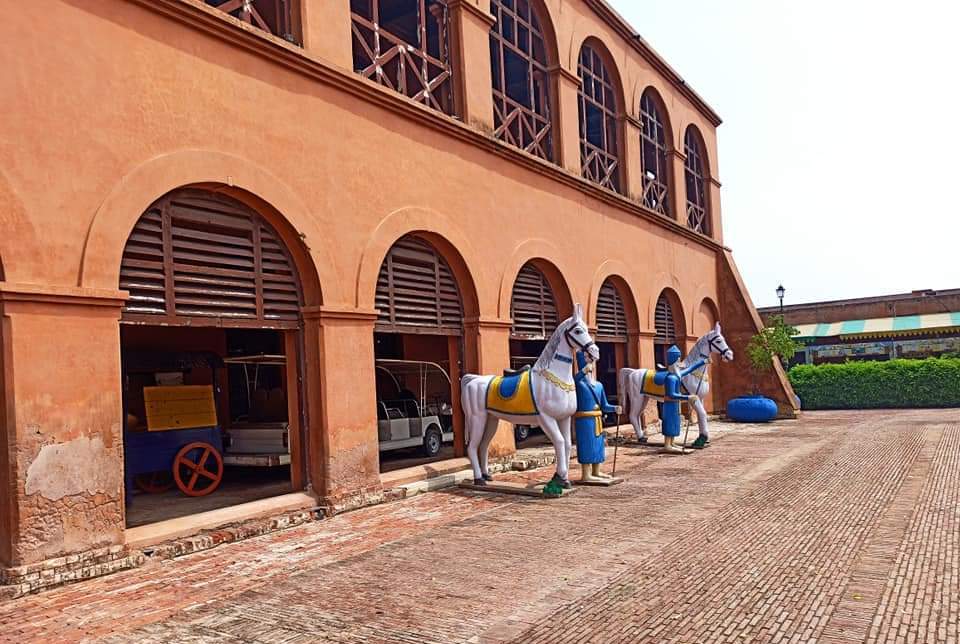 Qila Gobindgarh – the very symbol of Punjab. A symbol of the times when Punjab was forged. Spread across a grand 43 acres, right in the heart of Amritsar city, this magnificent, heritage site has a glorious history of its own, spanning across 257 years – right from the era of the Bhangi Misl to the time of Maharaja Ranjit Singh- to The British East India Company to The Indian Army to now when finally, it opens its gates to the people of Punjab.

Despite being under restoration the Gobindgarh Fort has gained popularity in such a short time period and has become one of the best tourist places in Punjab. Due to its importance in Amritsar’s history. Many visitors have already declared it to be one of the best places to visit in India.

Discover the grand stories of the past. Discover the history of one of the best historical places in Punjab.

Qila Gobindgarh – Amritsar Fort is a historic military fort located in the center of the city of Amritsar in the Indian state of Punjab. The Fort was until recently occupied by the army but was opened to the public from 10 February 2017.

During my visit to Amritsar – Punjab- India, I realised we learn and understand much more when we witness such events. There are many such places in our country which have great historical significance. India has a rich history of invaders, rulers and freedom fighters. Our ancestors ensured we survived and breathed free air; though polluted. But now we are no longer slaves to outsiders.

Punjab is the sword arm of the country and has been on the invasion route to the heartland of India since, the beginning of the recorded history.

Qila Gobindgarh is a historic fort located in the center of the city of Amritsar. This fort has survived numerous attacks on the city. Now turned into a tourist spot under the care of our Armed forces displays various aspects of the city treasures, culture, etc. The museum built within gives us a glimpse of the exhibitions of Sikh martial history as well as the treasury of Maharaja Ranjit Singh including the famous Koh-i-Noor.The light and sound show takes you through the life journey, history of the fort, and its rulers. This fantastic show gives you goosebumps, which linger with you!

BRIEF HISTORY OF THE FORT

The Punjab region in the 18th Century was ruled by clans called Misls. it was in the 1760s that Gujar Singh Bhangi,- a local chieftain- built this as a mud fortress- and it came to be known as “Bhagian da Qilla”. They owned it till 1809 or for almost 49 years. However, the financial position of the misl deteriorated over time and by 1809 a minor ruler Gurdit S. Bhangi, a descendent of Gujjar Singh, was ruling Amritsar with the help of his mother Mai Sukhan. Mai Sukhan asked Arur Mal, a sahukar (trader) of the Bhangi township, to pay nazrana(Tribute). Not wanting to do so, Arur Mal migrated to the township of the rival Kanhiyas misl in order to avoid payment. At that time Maharaja Ranjit Singh was a rising star belonging to the Sukerchakia Misl. Our Mal conspired with Shaikh Kamaluddin, a leading citizen and they invited Ranjit Singh, to take over the fort and the territories of Gurdit Singh. Maharaja Ranjit Singh was looking for just such an opportunity. He called upon Mai Sukhan to surrender a big cannon famously known as the Zamzama Cannon also known as “Bhangian di Tope”. Maharaja Ranjit Singh claimed that he had the right to the cannon as it was the Sukerchakia Misl’s share of the spoils of the war with the Afghan king, Ahmad Shah Durrani in 1765. The word Zamzama means “the Taker of Strongholds.” Mai Sukhan refused. Ranjit Singh thereupon entered the city through the Ahluwalia gate. The Bhangies could not hold up again Ranjit Singh’s huge force.

The Maharaja took over the fort and along with it the Zamzama Cannon and Mai Sukhan and the Bhangies were granted a few villages for their maintenance. It is stated that after winning the Fort, Maharaja Ranjit Singh went to Shri Harmandir Sahib for darshan and thanking the supreme one and distributed positions to the residents of the town according to their merit. The capture of the fort was a valuable acquisition for Maharaja Ranjit Singh. He renamed the fort ‘Gobindgarh’ after the tenth Sikh Guru, Guru Shri Gobind Singh Ji. One of the main reasons for the consolidation of the fort most likely was to guard the city of Amritsar and Shri Harmandir sahib popularly- known as Golden temple– from invaders. This bean-shaped city was most vulnerable to attacks and there were constant threats from the Afghans from the northwest frontier. This positioning of the fort outside the historic walled city, unlike other forts in the center of the historic cities, acted as an invincible barrier to get through to the pilgrim city The fort saw major repairs, additions, and rebuilding from 1805 till 1809, under the supervision of its second governor and foreign minister of Maharaja Ranjit Singh, Fakir Azizuddin. Large sums of money were spent to make the fort a solid defense fortification with the help of the French Generals who had joined Maharaja Ranjit Singh.

The Maharaja ruled successfully for forty years from the Sutlej to Indus, from Punjab Hills to Khyber Pass on the Indo-Central Asian Route Every year he spent some time at Amritsar for a change of climate and taking a bath in the holy tank. Generally, he reached Amritsar before the rainy season set in and remained there till the Dussehra celebrations were over. The Fort was captured by the British after the Second Anglo-Sikh War in 1849. After Independence, the fort was garrisoned by the Indian army in 1947. Qila Gobindgarh has been at the very heart of political events in Punjab for most of its existence. Since it was always a military preserve, it was inaccessible for the common man. For almost a century it was hidden within a surrounding compound wall and concealed by trees and vegetation. More than any other military site Gobindgarh encapsulates the dramatic rise of Punjab, it’s golden days, and then the collapse of the Sikh Kingdom when faced with the relentlessly expanding British Empire, till its independence. Finally, recognizing the historic significance of this fortified precinct, in 2006 the Government of India handed over the vacant possession of the fort for protection and conservation to the Government of Punjab. It was declared as a historical monument by the Government of Punjab under The Punjab Ancient and Historical Monuments and Archaeological Sites and Remains Act, in 1964.