Dishes You Need to Try in Kerala 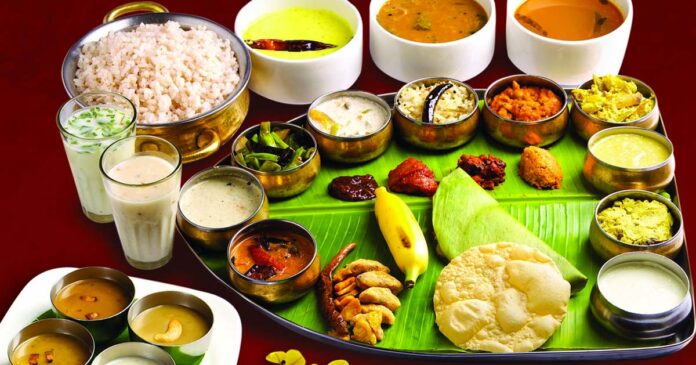 Dishes You Need to Try in Kerala: If you’re used to the standard North Indian dishes that are ubiquitous in Indian restaurants (think butter chicken), you’re sure to find a surprise in Kerala. The distinctive cuisine of the coastal state is linked to its ancient trading heritage and a fusion of global Christian, Muslim, and Hindu culinary traditions. Coconuts, seafood, and spices abound and come together to give Kerala food its flavor.

There are also differences between cuisines in the north and south Kerala – the cuisine of the northern Malabar region tends to be rich in spices and has Arab, Dutch and Portuguese influences. Don’t be surprised to find beef on the menu! It has become an intrinsic part of the state’s identity since Syrian Christian missionaries arrived there with their cuisine centuries ago.

Read on to discover the top dishes you must try in Kerala.

Sadhya on a Banana Leaf

For a quintessential introduction to Kerala cuisine, start with a Saadhya (Kerala-style set banquet) on a banana leaf. There are over 20 items in this vegetarian Hindu feast, and it is an important part of festivals such as Onam. The objects are placed on the card in a particular order from left to right. On the left are pickles, chutneys, salt, papadums and banana chips. Curry is on the right. Rice, sambar, rasam, payasam and curd are also served at different times.

Saadhya is usually a lunchtime meal and is best eaten with your fingers (in fact, please don’t use cutlery!) Here’s a helpful guide on how to eat with your hands in India Has been. Ideally proceed from left to right as the flavors progress from mild to tart and sweet. When you’re done eating, fold the banana leaf in half to indicate you’re finished. That’s if you can eat everything!

In the capital, Trivandrum, order an extensive meditation at Mother’s Veg Plaza. Better still, get yourself invitations for a wedding or special occasion at someone’s home. Dishes You Need to Try in Kerala

The name of this famous Syrian Christian dish is certainly not easy to pronounce, so it’s fortunate that it’s known everywhere as Beef Dry Fry (you can colloquially just ask for BDF). This dish is so loved in Kerala that many people call it the cuisine of the state! To make it, beef pieces are sautéed or roasted very slowly in a heavy skillet along with coconut pieces, aromatic ground spices, chilies, and curry leaves. Some tourists prefer Syrian Christian beef curry, as it is more like Indian food to them. However, locals are prone to disagree.

Beef fries are popularly consumed with alcohol in local bars and toddy shops. So, you will find the most delicious dishes there. One of the best is the award-winning Mullapanthal Toddy Shop on MLA Road in Thripunithura near Kochi.

Don’t like spicy food? This light coconut fish stew, a typical dish of central Kerala, is ideal. Trade with Portugal flourished in central Kerala and the dish is believed to be a variation of a Portuguese one-pot fish stew called caldirada. Its name, molly, may be a derivative of the Spanish word mol, meaning a cooking sauce or mixture. The stew is made without the pungent tamarind (kudum puli) which is common in other curries of Kerala. Cardamom pods, cinnamon sticks, cloves, black pepper, and curry leaves impart a subtle flavor.

Meen Moli is widely available in Kerala. This is a specialty at the famous Fusion Bay restaurant on KB Jacob Road in Fort Kochi. Eat it with appam or rice. Seafood comes recommended at the Elphinstone Residence in Kochi, including the Meen Moli.

A hot and tangy Kerala fish curry, Meen Vevicthu will make you sweat! This red, pungent, tamarind-based curry is associated with the central Kottayam district of the state. It is traditionally made by boiling the fish without coconut in an earthen pot with selected spices, especially with Kashmiri chili powder. Sardines or mackerel further enhance the taste.

Try Meen Vevicthu at the ambient Fort House restaurant in the garden of the Fort House Hotel in Fort Kochi. It is served in the traditional style as an accompaniment to kappa (the root of the cassava plant). Dishes You Need to Try in Kerala

You cannot expect that kappa (the root of the tapioca/cassava plant) would be widely consumed in Kerala. The story of how this happened is interesting. Cassava is said to have been introduced by the Portuguese. However, King Visakham Thirunal of Travancore ordered its cultivation during his reign in the 19th century to stave off frequent famines. Residents were reluctant to embrace it, as it was seen as poor man’s food.

However, this changed in the 1940s when there was a severe famine in the state. Now, kappa is considered a delicacy. It is made by boiling and mashing the root of the cassava plant with grated coconut and spices. It is usually eaten with fish curry.

You can’t go to Kerala and sample the state’s official fish, the karemin (pearl spot). This revered fish, native to the backwaters of the Kuttanad district around Alleppey, is synonymous with Karimeen polychathu. The fish is marinated in a spicy paste, wrapped in a banana leaf, and steamed. yum!

Head to the opulent Grand Pavilion restaurant at the Grand Hotel in Kochi for authentic Karimeen Polychathu, or head to the family-run Karimpumkala restaurant in Pallom near Kottayam. Karimpumkala started as a toddy shop in 1958 before expanding. Dishes are made from recipes belonging to the owner’s mother. Dishes You Need to Try in Kerala

Kerala has its own style of biryani. In fact, some are different. Thalassery Biryani, from Thalassery in the Malabar region, is the most celebrated. Merchants from the Middle East brought it with them. They settled there and established themselves as the Muslim Mappila (Mopla) community. Their biryani is heavy on spices and is made from short-grain jeeraksala rice, unlike the usual long-grain biryani rice.

Paragon Restaurant, established in 1939 in Calicut (Kozhikode), is a place unto itself filled with Malabar Biryani. Paragon’s off-shoot, Salkara, is also famous for Biryani. Also, Calicut has the iconic Zain’s Hotel on the Convent Cross Road near the beach. If you want to dine somewhere more upmarket in Calicut, head to the hosted restaurant at Hotel Asma Tower.

Prefer chicken to fish but still want some fire in your mouth? Naive food definitely packs a punch! This home-style dish is one of the spiciest dishes of Kerala. It is also quite oily, and it has many forms. In this dish, kozhi (chicken) is marinated in chili powder, and red and green chilies are used to flavor the thick curry sauce. So, proceed at your own risk! Nadan Kozhi curry goes well with rice, appam, or Malabar paratha.

Enjoy it by the pier at Seagull Restaurant on Calvathy Road overlooking the sea in Fort Kochi. Make sure you book in advance if you want a table with a sunset view.

Appam is compared to Dutch pancake but is made from a batter of fermented rice and coconut milk. This side dish is eaten as bread with all kinds of stews and curries. Soft in the middle and crisp at the edges, it is a staple in Syrian Christian homes where it is served at all times of the day, including breakfast. While eating, break a small piece of appam with your right hand and use it to take some main dish.

This succulent South Indian bread, as its name suggests, is from the Malabar region of Kerala where it came through the Arabs. Its flaky, flaky appearance distinguishes it from the traditional North Indian paratha. Tear it off with your fingers and eat it with beef for ultimate satisfaction. For the residents of Kerala, this combination is not a dish but a feeling. Malabar Paratha can be served with any type of vegetable.

Another Malabar specialty, Pathri is basically a roti or pancake made from rice flour. It belongs to the Mappila Muslim community, who usually eat it for dinner along with non-vegetarian curry. Pathiri can be pan-cooked (ari pathiri), deep-fried (ne pathiri), or stuffed with meat and vegetables (irachi pathiri).

Want to have a typical Karelian breakfast? Puttu along with Kadala is one of the most popular food in the state. Locals also eat puttu with the fish curry for breakfast, although this may be a bit much for Western tastes in the early morning! Puttu is made by steaming ground rice and grated coconut together in a cylinder.

In a testament to the popularity of puttu, Dhe Puttu in Kochi and Calicut is devoted entirely to the dish. The restaurant chain was founded by Kerala actor Dileep and television personality Nadirshah to showcase puttu. There are about 20 varieties available, and not just for breakfast. Some of them are really creative and curious, with meat and fruit mixed in! Go there for puttu thali (platter) at lunchtime.

The king of sweets in Kerala, Payasam is similar to the kheer of other parts of India. It consists of rice that is slowly cooked in milk, coconut, sugar, cashews, and dry fruits. This sweet is always served during festivals. Pradhan is a thicker, Kerala-style version of this. Various ingredients such as jackfruit, lentils, chickpeas, or moong are sometimes used.

Don’t miss the opportunity to taste this sweet Kerala delicacy, which is a delicious snack. Ila means leaf, and parcels are made from atta (rice) dough filled with a mixture of coconut and jaggery (unrefined cane sugar), and steam-cooked in a banana leaf. The banana leaf gives it a delightful smell and taste. Bet you can’t stop at just one piece!